The system of Anthroposophic Medicine

According to the natural sciences

For modern scientific medicine, man is a machine or a laboratory. As long as everything functions well, he is considered healthy, if something goes wrong, he is sick: healing is seen, therefore, as repair work. The means used (above all chemo therapies) reinforce this concept, for there are indeed processes in man which respond according to the mechanic model, as can be seen in laboratory experiments. In Anthroposophical research man is, of course, much more than a machine. It is from this reality of man as body, soul and spirit that Anthroposophy starts examining man and nature.

The Four Constitutive Members of Man according to Anthroposophy.

In academic medicine man’s physical body is seen as a “machine” and can be examined as a corpse.

But this latter decomposes and loses its form. Daily experience teaches us, however, that the human body keeps its form with seemingly inscrutable determination, despite disease etc… There is obviously at work an organization of forces or energies that prevent disintegration of the body while we are still in life. These forces can be called “the vital life force body”.

The vital life force body is super-sensible and can only be perceived in its manifestations.

The processes seem to go in the opposite direction to those of the physical body, which being subject to the laws of gravity, are drawn to the centre of the earth, whereas the former are drawn upwards towards the cosmos. In plants it is easy to see this: plants are rooted in the earth and grow towards the sky: they are living beings which in the process of growth, pull away from gravity.

Animals also have a physical body and a “vital life force body”. They are distinct from plants in that they develop a conscience and sensations: instincts, desires, pain and pleasure. Here too, we can speak of a super-sensible organization: a feeling or sentient body. Animals are animated beings. 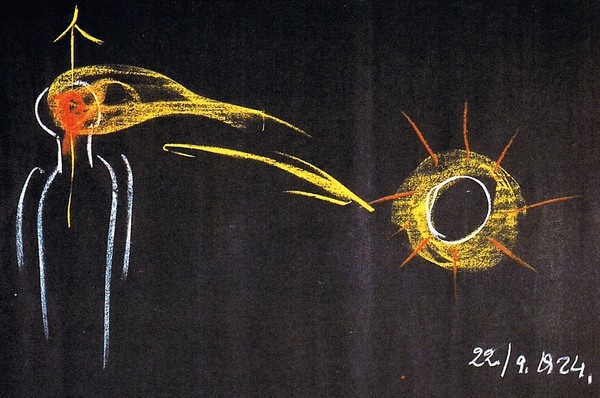 In human beings the physical body also has a “vital life force body” and a semtient body, but are distinguished from animals by their “self-conscience” (being aware that they are conscious), which culminates in the “self”.

Thanks to the personal force of the “self” which is totally individual, man walks in the upright position, talks and thinks, can be creative and create civilizations (but also destroy them) and be enthusiastic. Animals cannot. Animals are not in the slightest interested in cultural activities: wasps build their nests as they always have done; foxes catch hens with the same cunning as their ancestors; no less and no more.

Man is the sum of nature.

Man is, therefore, articulated in four parts: a physical body, a vital life force body, a sentient body and the “self or ego”. From this we can see that man is incredibly more complex than just the “machine” of the natural sciences. This “man” is a universal measure of the Creation in which “man is the sum of nature, while nature is made up of the infinitely numerous facets of man”. (Paracelsus)

While in the distant past, man, nature and the earth formed a single unit, there have, over the centuries, been many separations; the mineral world, the plant world, the animal world all separated off from man and now stand quite distinct from him. If seen in this light, all things in nature have a primordial relationship to man.

For the least aspect of that complicated organization called man, in nature there is an “opposite” aspect. The question “how can a natural substance become medicine for man?” is thereby essentially resolved. Everything in nature has always had an affinity with man and contains a curative aspect. If used correctly, natural medicines prepared with anthroposophical knowledge do not have side effects